A theory that has been under observation and has been worked on for a really long time period now is the fact that women tend to live longer than men. It was probably first brought to notice as a joke and it was amazement when it was proved as a theory. However, since long and answer is being looked for. Amazingly, this is not concerning any biological term goal. If you have to go by the figures, then an average male lives up to 76 years of age while an average female is alive till 81.

While people are looking around for different reasons as to why such a thing happens, we have compiled a list. Here is a list of 20 pictures that goes on record to prove that probably due to the lack of common sense men take leave earlier than women.

Without further ado let us take a look at the pictures. 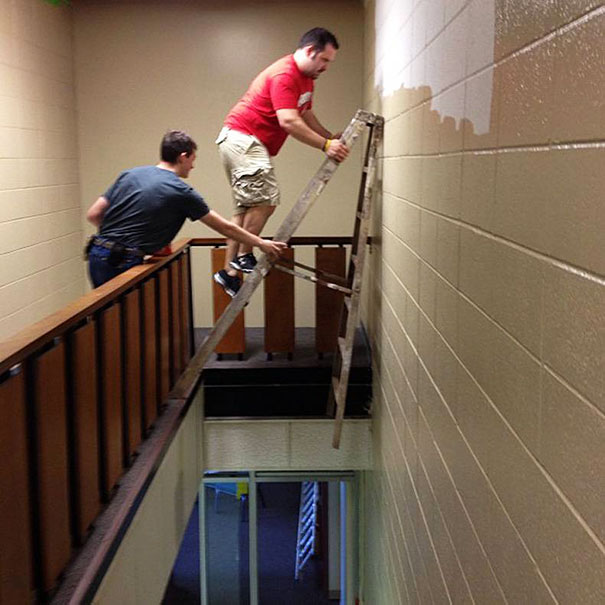 Sure why not just put a trapeze and jump on it to reach the desired location. You can then go forward and hang from a string while you fix whatever that is you are trying to fix. That should do it. 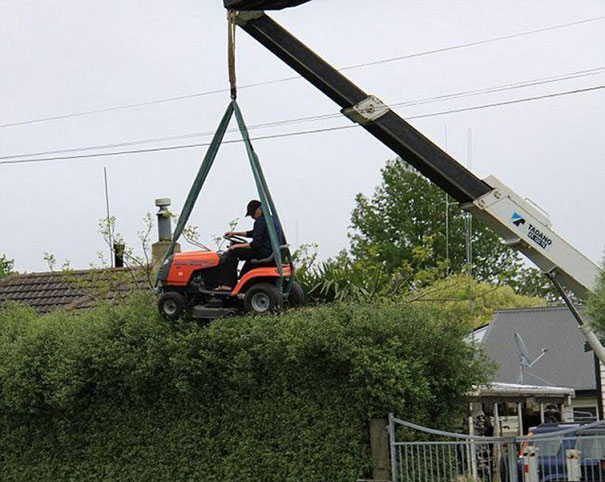 There is a difference, a wide difference between stupidity and creativity. We are certainly sure that this comes nowhere close to the latter. Swings are built for a purpose, you can use them. 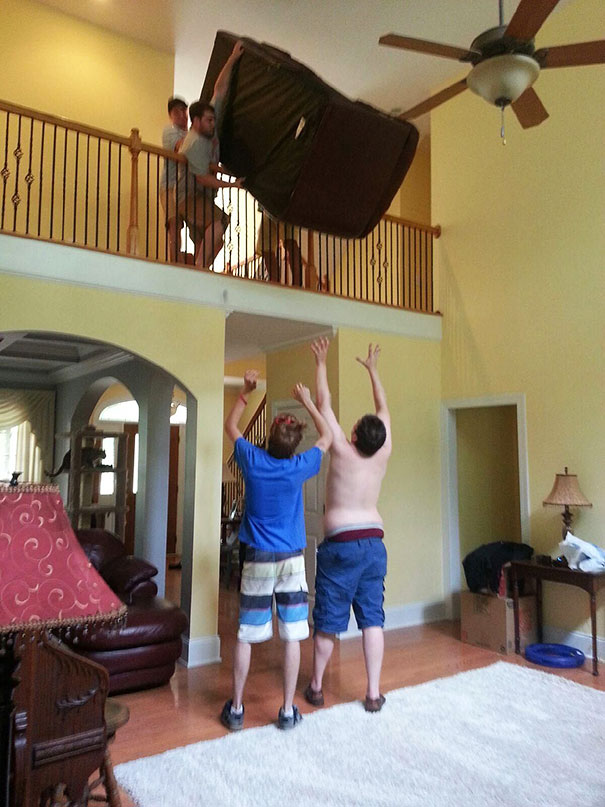 Remember the episode is FRIENDS, where Ross kept on shouting “Pivot’ to Chandler and Rachel? Are we not glad that they did not try this stunt at first. If there would have been an After picture, we are sure it would have had at least one broken bone. 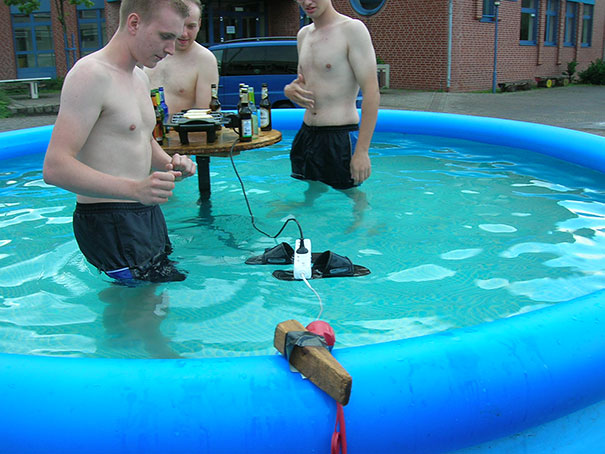 This picture screams danger so loud, that I am squirming sitting in my seat miles away. I am so happy that this is the only picture that there is present in the list that gets me this uncomfortable. Electrocution is real, guys. Wake up! 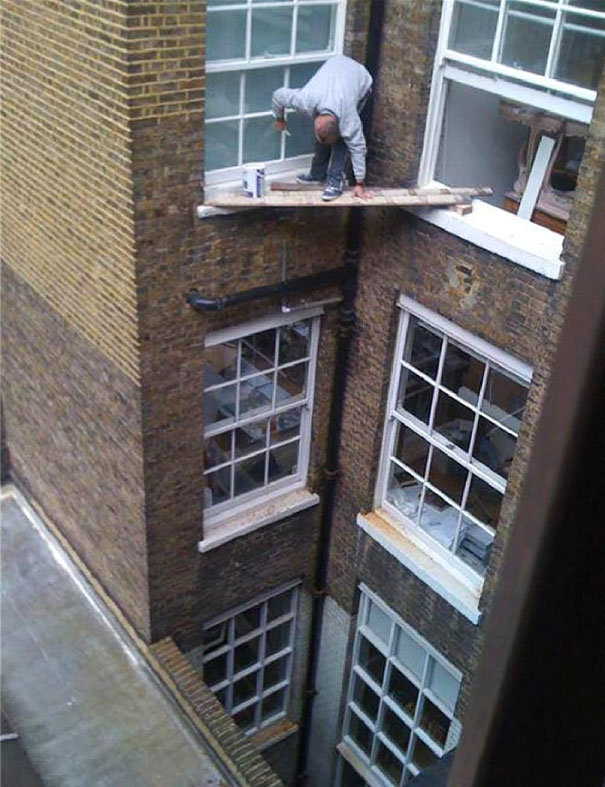 If you have a fear of heights, I request you to skip on to the next picture. There is not a single harness in the picture, and of course, this is exactly why surfboards were invented in the first place. 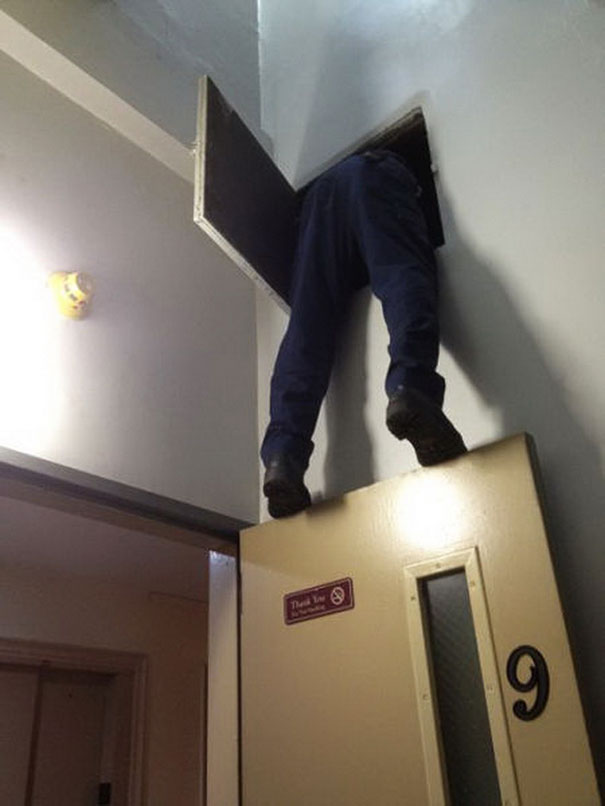 Not gonna lie, we all have storage spaces in the most uncomfortable and inaccessible areas of our house. But, this is by far the worst way to reach up to it. Imagine someone closing the door from below. It would be one fine game of hangman. 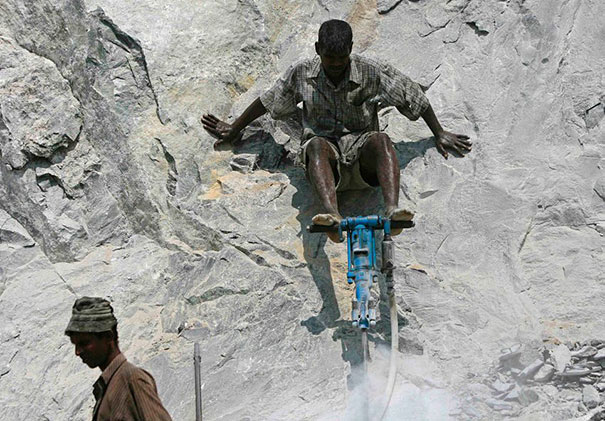 Adventure sports are a thing, we are aware of it. People live and love the thrill that it brings in your blood while going through the engagement. But that does not mean you will take it a notch higher and begin experiencing death. At least don on a proper gear before rushing into certain death. 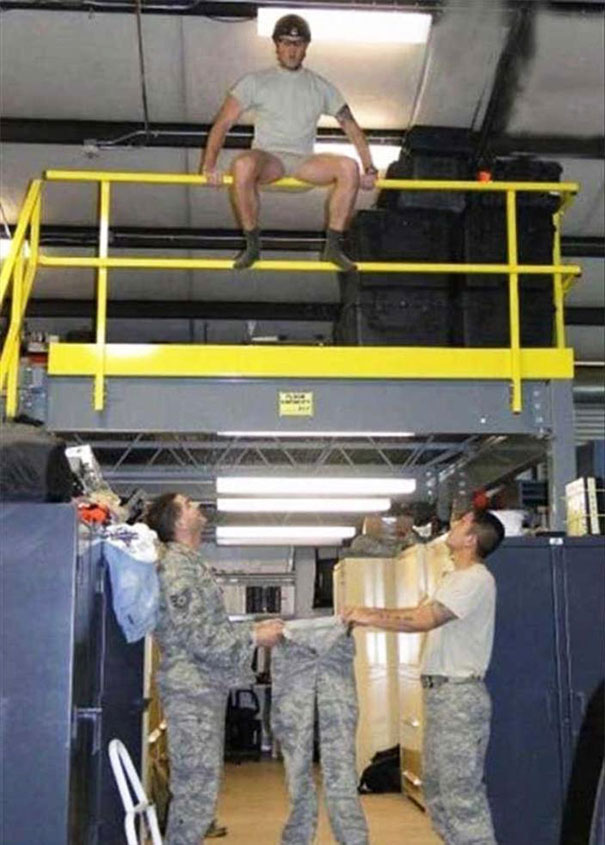 It is nice to know that taking and putting yourself in the face of avoidable and unneeded danger is not only limited to regular men. The height of danger and irresponsibility that is given out in this picture, is more than enough. We sure hope all the bones were joined after the jump was made. 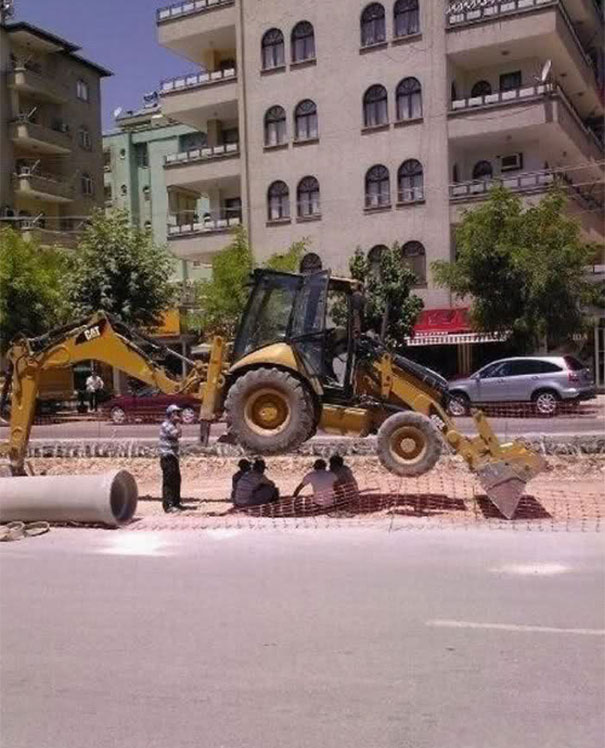 We have known of people performing races and stunts using motorbikes, cycles and even cars up to an extent. However, we have never seen people actually trying to make an earth digger jump out of its spot. I pray to God, that all the five men sitting under the shadow of a flying JCB is without bruises. 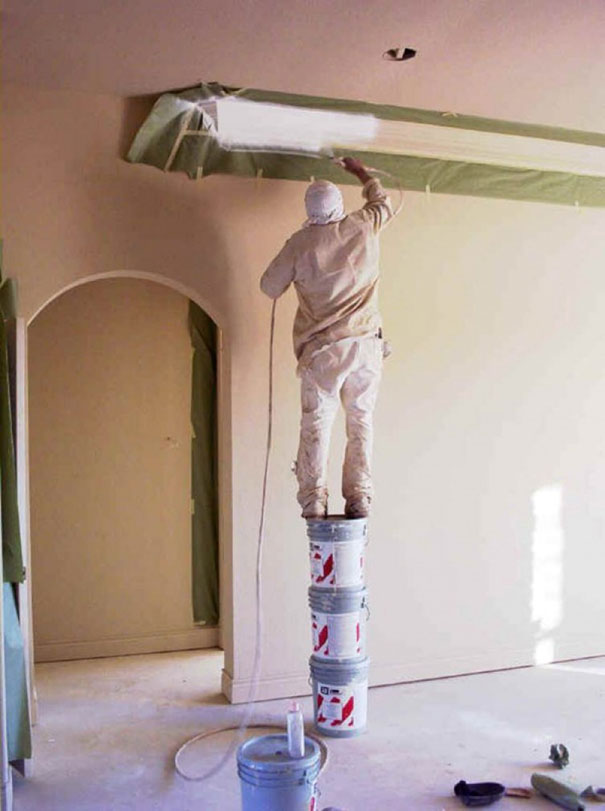 There is one question that I have and I keep on asking myself the same with almost every picture. What is the issue with men ignoring ladders even though it is probably the only thing that would keep them from killing themselves. There is absolutely no point of stacking up buckets and then using duct tape as a platform to reach the desired height. 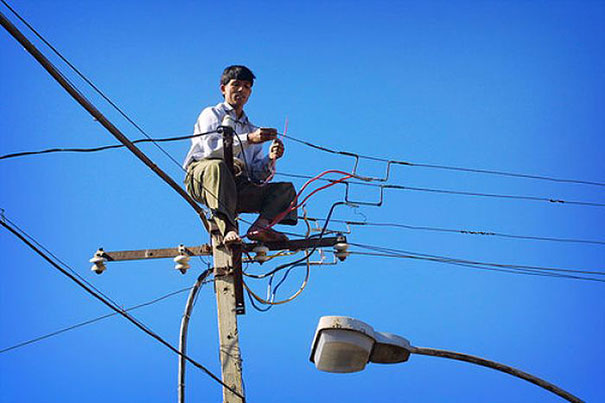 This is probably the only picture wherein I cannot blame the man in the picture. This is because this is probably the job of the electrician and comes with the parcel of his work. But, if you look closely you can not spot a single protective gear on him. Prevention is better than cure is a phrase that most of these people have not heard of. 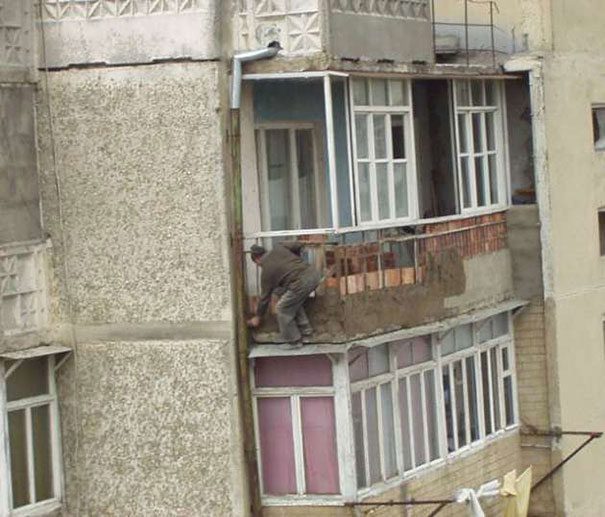 From the looks of it, we feel that the man is trying to escape or is he trying to fix something? Whatever it might be, there can surely be no justification as to why this young man in is hanging on the outer side of his balcony. It looks like he is gonna jump from that height in a few seconds or maybe slide down the water pipe. We hope he did neither and got himself back in the room. 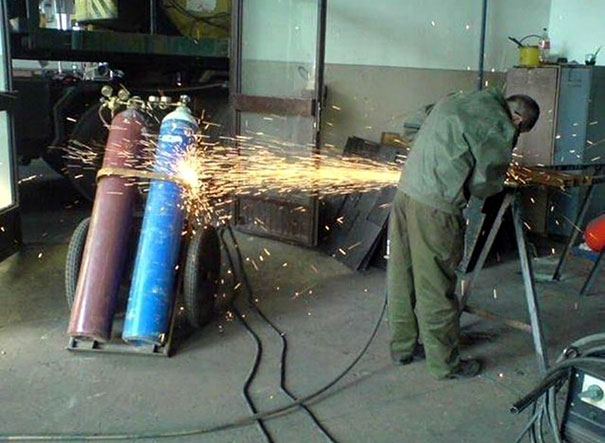 Okay, I may not be a professional and not know about the art of the work the mechanic is currently on. However, I am sure of one thing that those fire flakes under no circumstance should be in such a direct contact to the two-cylinder of gases by the man. In most circumstances, the cylinder might be filled with inflammable matter which might cause one of the biggest fire. 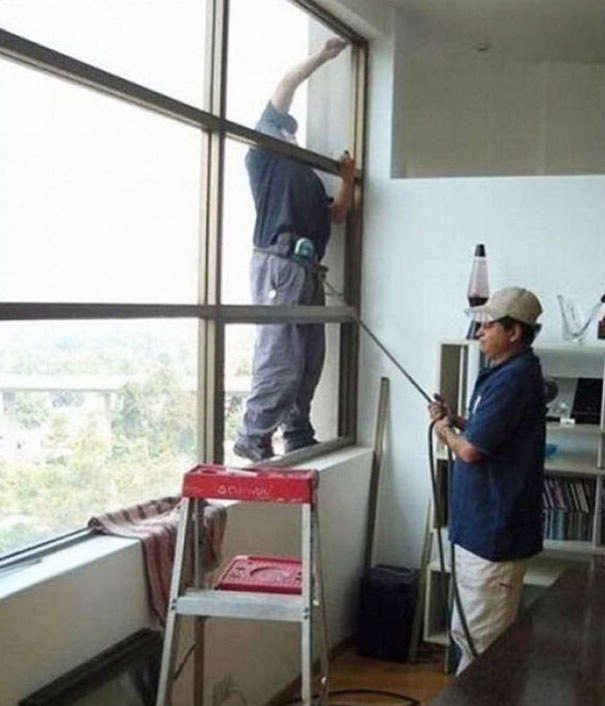 Is coming under the possession of a harness really that difficult. I am aware that certain staffs are dedicated entirely to bring about the shine on the windows from the outside. Tom Cruise sure would shed an admiring glance towards this fine man outside. 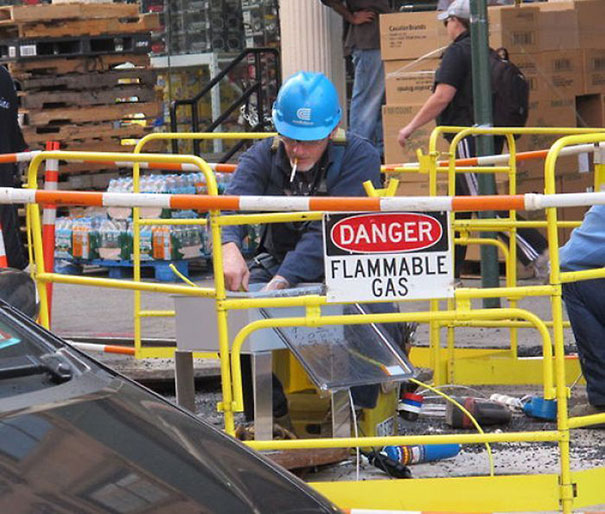 We have heard that ‘Smoking is injurious to health’ time and again. But, in this picture smoking is harmful to every person who is within a two-mile radius. If there is a flammable gas somewhere near you, then the best and the easiest way to maintain safety is not to have a source of open fire anywhere near you. We sure hope someone stubbed the cigarette out. 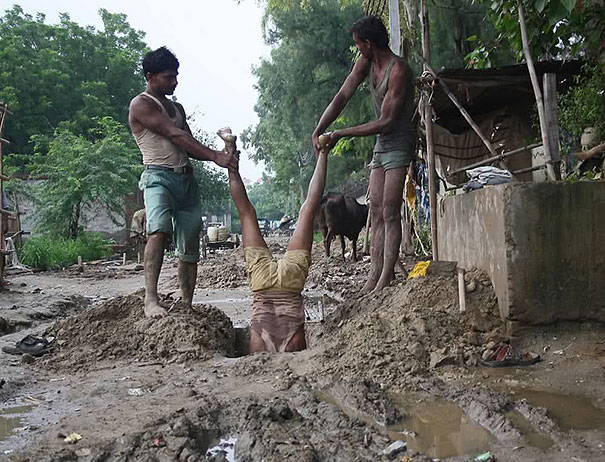 In case the hand of even one individual lets go due to the pressure, this would grow up to become one slippery disaster of a lifetime. The man should have been requested to come out of the hole at once. 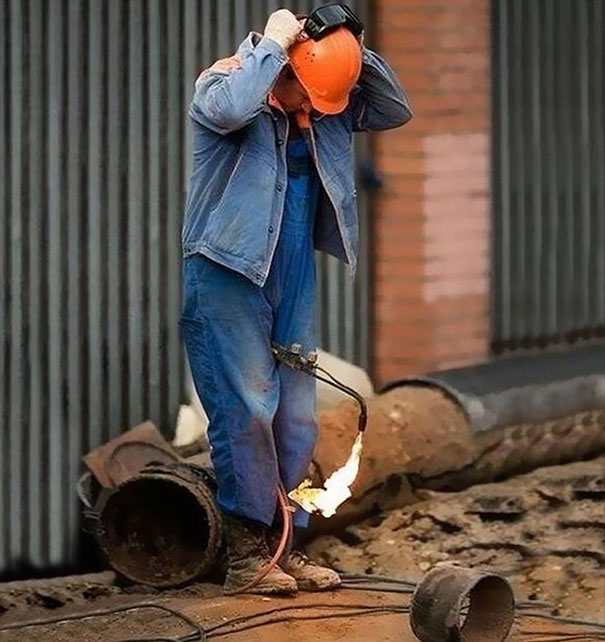 In case if you are trying to set yourself on the wire, here is a neat trick for you. You can never go wrong with that. I repeat never. At least turn the lever off before fixing your helmet. 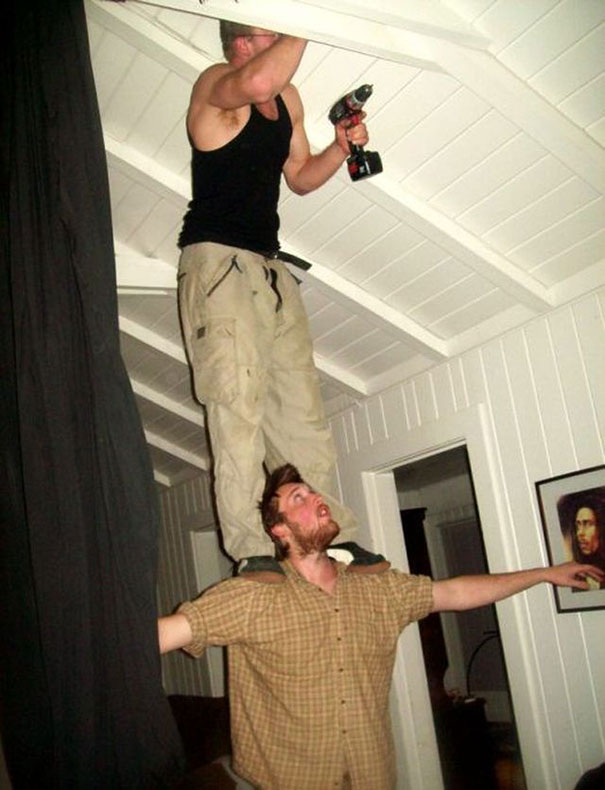 There is a reason as to why the proverb, ‘birds of the same feather flock together’ is a rage. This gives the prime example as to why friends of the same mentality can be both lifesaving and dangerous. 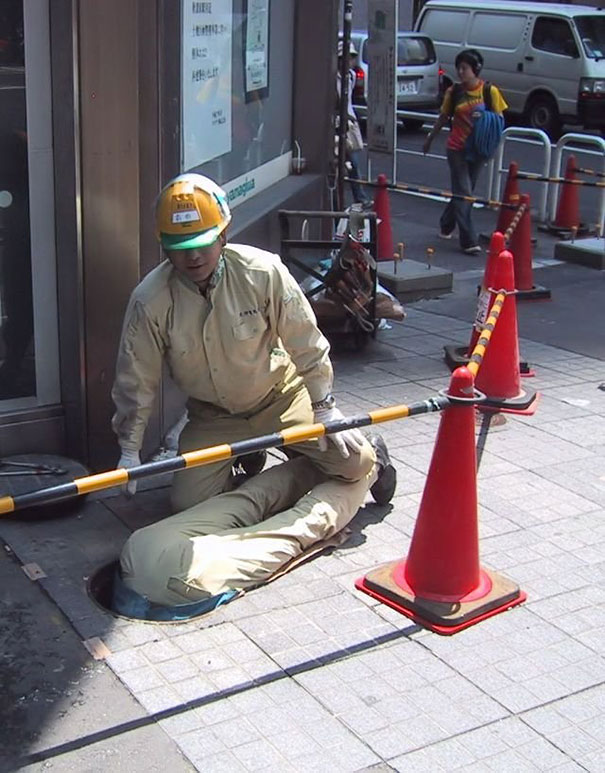 Balance is the key and that is what we see in this picture very valiantly displayed. Please kindly get your head out of the gutter, sir. Literally. 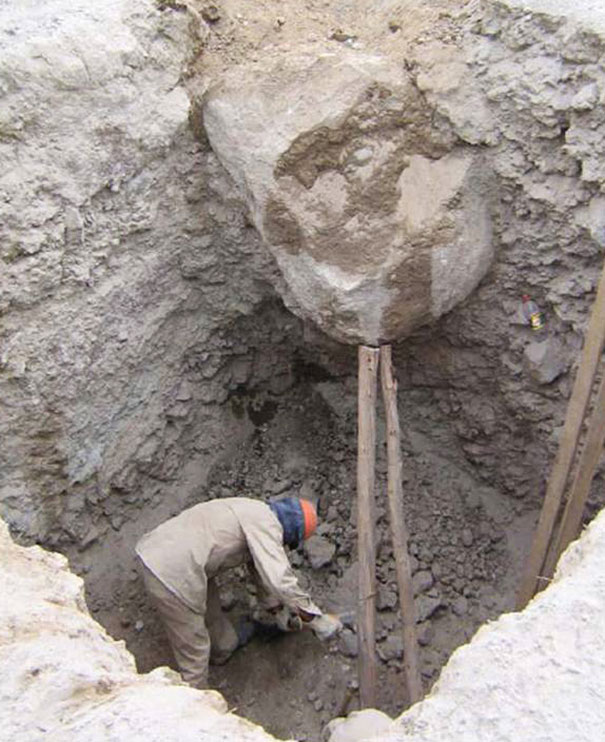 Remember when I said that there was only one picture in the list that was getting me uncomfortable? Scratch that. This is the second. If it were up to me, I would have dragged the man out of that pothole.