Anand Mahindra is a very active user of social media specially Twitter. He is known for his remarkable replies and never fails to express his opinions. He usually expresses his thoughts while keeping in mind guidelines of social media sites and share his point of view on a wide range of subjects.

His posts and tweets inspire many people across the globe and create a sensation among youth. He has a huge following on social media platforms prominently Twitter.

His Tweets are talk of the town most of the time as, on Twitter, Anand Mahindra express his opinions in a very articulated manner and that too within a limited word, which saves time as well. This time, the business tycoon voiced his concern over the difficulties that India will face with electric automobiles.

As we all know Mahindra is a leading name in the Indian automobile industry and he himself is very passionate about electronic vehicles in India. His concern is obviously genuine and that’s why his tweet created a buzz over the internet.

Recently, with launch of numerous new models, including the Mahindra XUV400, Mahindra entered the electric vehicle market. On September 8th, a new electric SUV was displayed in the Indian market. It will be out for sale in January.

Electric scooter owner penalized for not having a pollution certificate 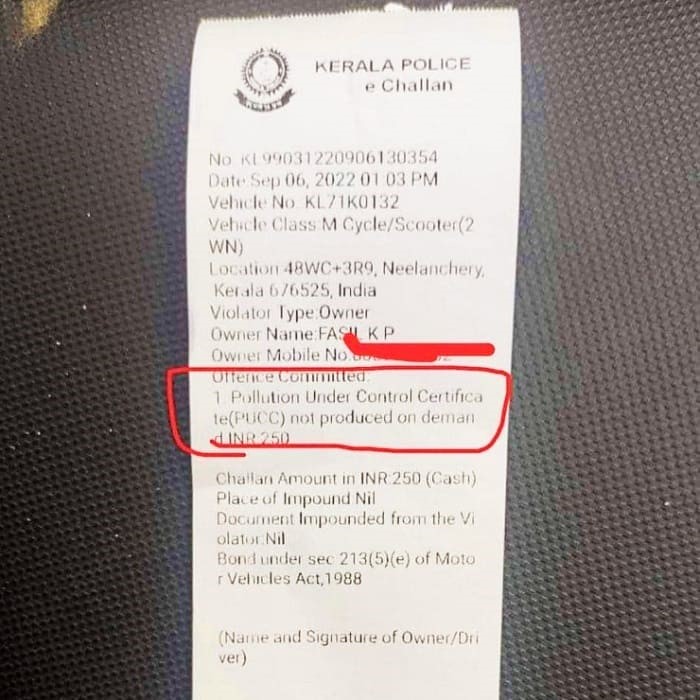 Netizens are concerned over the images of the Challan imposed on an electric scooter owner.  The owner was penalized for not having a Pollution Under Control (PUC) certificate, despite the fact that electric scooters are introduced just for reducing air pollution.

Reportedly, a driver without a Pollution Under Control (PUC) certificate was fined by the traffic police for operating an Ather electric scooter. Currently, this incident is hot topic of discussion, and everyone is talking about it.

The electric scooter’s photo and an official Challan receipt went viral on social media and is being circulated at the speed of the light.

The picture of the Challan receipt for the Ather electric scooter clearly shows that the Pollution Under Control Certificate was not issued on demand. The owner of the electric scooter would be fined a total of Rs 250 under Section 213(5)(e) of the Motor Vehicle Act of 1988.

In a recent tweet, Anand Mahindra shared the images and referred to them as the “biggest challenge” the electric vehicle sector is facing in India. In a sarcastic manner, he said,

“And you thought the biggest challenge to going electric was charging infrastructure?”

And you thought the biggest challenge to going electric was charging infrastructure? 🙄https://t.co/o6992kvXck

The CEO of Ather, Tarun Mehta, also commented with a “sigh” in response to one of the posts.

Let’s see if rules get changed in future.