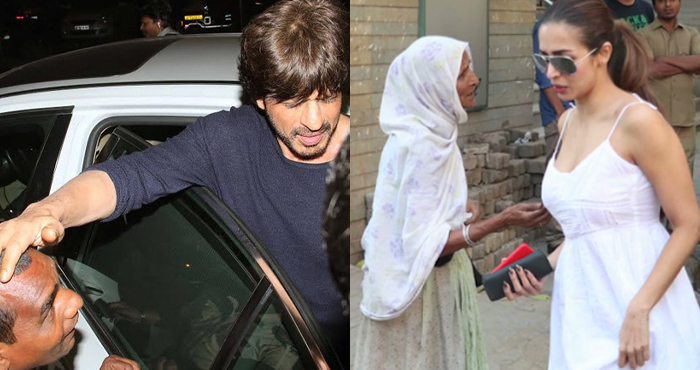 Some of the most talented people in the world, the actors and actresses working in the Hindi film industry have been known to have interactions with an odd beggar or underprivileged individuals from time to time. And, while most of them pay heed to, and try their best to do what is the most fitting thing to do for them at the time, but there have been instances where their behaviours were not the best that could have been done at the time. So, here’s a look at 10 such times when the response of B-Town celebrities when they met a beggar or underprivileged people won hearts and maybe broke some.

Over recent years, Salman Khan’s name has come to be synonymous with humanitarian efforts of his through his organisation, Being Human. The superstar that he may be, at times he shows up his humanitarian side to the public too. And, in one such encounter with a group of underprivileged kids when he stepped out of a reaction, showed how great of a human can he be. The actor when he saw the kids who were selling books and balloons, hugged them, gave their books a read and later gave them some amount of money too, and made their day.

The King of Romance of Bollywood, also known as King Khan, Shahrukh Khan has often been talked about for his determination to never disappoint his fans. And, when he met a beggar after stepping out of a hotel with his team, and what he did with him would have won the hearts of his fans all over again. When caught the sight of this beggar, who as pleading for help from this superstar of a person, he took no time in getting to the action. He immediately ordered his team members to arrange food for the needy man as soon as possible.

Once, Malaika Arora, who is held to be one of the fittest people in the B-Town at the moment, despite her age, once encountered an underprivileged aged female lady, who approached him once while she was leaving from a restaurant in Bandra area of Mumbai. But, she completely ignored the lady beggar at first and when she persisted, she commented and moved on, after saying that ‘I don’t have my bag’.

Rumoured to be the girlfriend of the first person on this list, Salman Khan, who is a known humanitarian, Lulia Vantur, replicated the acts of Salman at one time during her interaction with a beggar. While she was leaving a restaurant, she was approached by a beggar, who happened to be a middle-aged female, and she asked her for help. Lulia’s first response to the beggar’s response was ‘Thank you’ and then she followed it up with another sweet gesture as she handed her some money after getting seated in her car.

A relatively lesser-heard name of the B-Town in the recent years, Zayed Khan once displayed a side of his personality that impressed every person who saw that incident and knew him for having played roles in some of the most iconic films of modern-day Bollywood. While he was headed to Fardeen Khan’s birthday party, some children came in to meet him. He picked up some of the slum kids who had come to meet him, in his arms, kissed them and interacted with them, making their day in the process.

The two actresses of Dangal fame, where they played the role of professional wrestler sisters, Sanya Malhotra and Fatima Sana Sheikh, gathered a lot of praise for themselves, for having treated the underprivileged kids that they met once, while out for dinner. The kids had their fan moment after spotting them and approached them for a meet and greet and these two actresses, as sweet as they are treated them with the best ways possible. They talked with them and posed for pictures with the kids for the photographers who were present there at the moment.

Affectionately called to be Shahenshah by his fans, after his role in the film by the same name, Amitabh Bachchan, was at a time, the face of India’s polio eradication campaign. In some instances, he even administered drops of the polio vaccine to the underprivileged kids by his own hands, and in another, he cleared the debts of over a hundred farmers residing in the Wardha region of the state of Maharashtra. Mr Bachchan has also been seen at various times helping the ones in need.

After having had not the best of careers in the Hindi film industry, Vivek Oberoi has grabbed a lot of headlines for his work as a philanthropist. The actor has been involved with projects like Project DEVI, which commenced as a part of his own charity which he looks after, The Yashodhara Oberoi Foundation, and has also worked on many other different missions, which primarily focussed on the social upliftment of kids of all underprivileged backgrounds, and genders, especially girls.

Known for his quirky outfits on and off the screen and his fun-loving personality, Ranveer Singh, shows no hesitation in showcasing what he feels really, even when he gets to meet underprivileged kids and an underprivileged beggar. He has been known to sponsor mid-day meals of 10,000 children for the duration of 1 year. And, won the hearts of the fans and followers again, when he was spotted shaking hands with a differently-abled beggar whom he met while out on the streets.

Kareena Kapoor Khan, the heartthrob of many men of the country and admired by many of the females too, for her charming persona on the screen and off it. But, in a very uncharacteristic move of hers came to light when, while with her son, walking she came across a minor beggar who came in and held her legs, asking for help. She paid no heed to the presence of that underprivileged individual around her and walked off.