Abhishek Bachchan is one of the actors who hasn’t had a highly successful career in the sphere of acting, despite hailing from one of the most famous families of Bollywood, that of the Bachchan’s. While his father, Amitabh Bachchan, is one of the best actors in the whole country and has ruled over the hearts of millions of audiences with his stellar performances in the movies, Abhishek, who tasted bits and pieces of success, did not have a full-fledged career as an actor. However, his performances in the movies like Sarkar, Guru and recently in the Netflix movie “Ludo” has won over the hearts of many a people but there are always haters who keep trolling him on the social media sites. Not only that, at times these trollers have taken on his wife Aishwarya Rain Bachchan as well and has trolled her for being the wife of Abhishek. 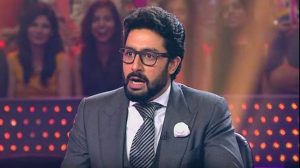 In one such instance, a female Twitter user asked an offensive question to the actor and got a savage reply from Abhishek. The user posted a Tweet asking Junior B a question that seemed to be fairly offensive. It read, “Hash hai kya (do you have hash)?”

To this, Abhishek gave a fitting reply that won over the hearts of many of his fans. He politely said that he does not do any kind of drugs and then tagged Mumbai Police in his reply, saying that if someone does something untowards related to drug abuse, the Police can take care of him/her. The Tweet read, “No! Sorry. Don’t do that. But will be very happy to help you and introduce you to @MumbaiPolice am sure they, will be very happy to learn of your requirements and will assist you.”

This savage yet witty reply from the actor won over the hearts of many of his fans who lauded him for his presence of mind and sense of humour.