Global star Priyanka Chopra and singer Nick Jonas have been making headlines a lot in the last couple of days. The couple has been on the top of the trending lists, ever since Priyanka Chopra dropped ‘Jonas’ from her Instagram and Twitter bio. Her action has left fans wondering whether their relationship is kaput or are heading towards divorce.

Priyanka and Nick got married three years ago and they would be celebrating their third wedding anniversary next month. But, Priyanka’s changed username on social media has also led to speculations about the couple’s current relationship status. The media houses and the gossip mills are busy churning out stories one after the other hinting of a possible divorce.

However, all seems to be fine in the paradise of Priyanka and Nick. Recently, Nick Jonas shared a video on his Instagram where he can be seen pumping up his biceps, lifting dumbbells. The video shows his fit and muscular body. Sharing the video, Nick wrote: “Monday motivation, Let’s get it”

The post went viral in no time and was flooded with reactions from the netizens. However, the comment that stole all the attention came from the Desi Girl herself. Priyanka has been drooling over the video.

Ending all the speculations of rift at once, Priyanka posted a loved comment for her husband. She wrote: “Damn! I just died in your arms” followed by a heart-eyed and a heart emoji. 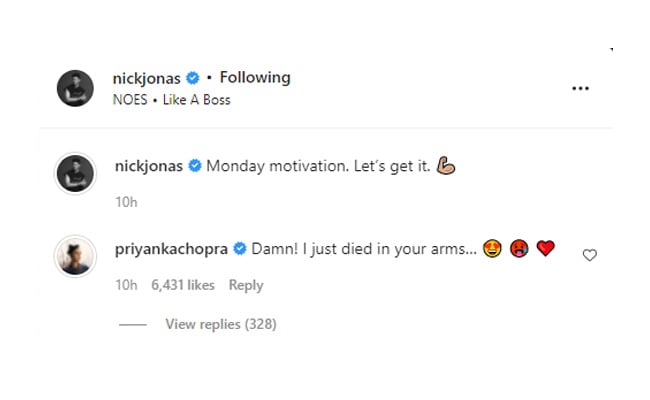 Earlier, Priyanka’s mother Madhu Chopra also opened up about the rumors between Priyanka and Nick, her mom, Dr. Madhu Chopra, said, “It’s all rubbish, don’t spread rumors.” She didn’t say anything else but her small statement was enough to end these speculations.