Bollywood actor and director Farhan Akhtar is getting brutally trolled on social media for his viral tweet (now deleted) on India’s hockey team.

Well, India’s Men’s Hockey Team ended their long wait of 41 years for an Olympic medal in men’s hockey. On Thursday, the Indian hockey team won the bronze medal at Tokyo Olympics by defeating Germany 5-4 at the Oi Hockey Stadium — North Pitch. Manpreet Singh and his team gave a stellar performance to bring Hockey back to the spotlight.

Soon social media was flooded with congratulatory messages coming in from all the corners for our Indian hockey team. From celebrities, cricketers to fans around the nation, everyone took to their social media to express their happiness on the victory.

Among many, Bollywood actor-director Farhan Akhtar also joined the bandwagon, however, in his tweet, he congratulated the Indian Women’s Hockey Team instead of the Men’s Hockey Team for winning a bronze medal at the Tokyo Olympics 2020. He wrote:

“Go Girls!!! So proud of #teamIndia for showing exemplary fighting spirit and bringing in our 4th medal..super stuff. #Tokyo2020 #Hockey,” 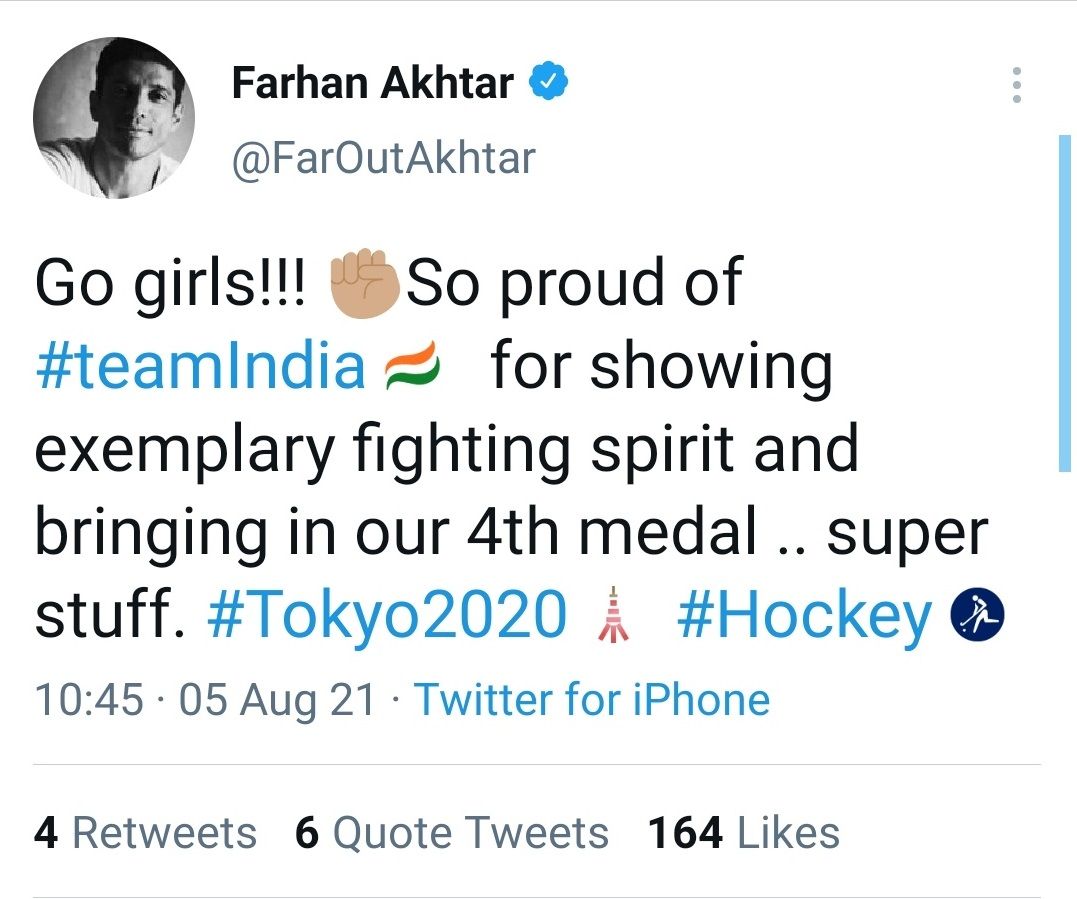 The tweet soon caught the attention of twitterati, who started trolling him. Later, as soon as he realized his mistake, Akhtar deleted that tweet and posted another tweet where he congratulated the Men’s hockey team, who won an Olympic medal for India. He wrote:

“So proud of #teamIndia for showing exemplary fighting spirit and bringing in our 4th medal .. super stuff. #Tokyo2020 #Hockey.”

So proud of #teamIndia for showing exemplary fighting spirit and bringing in our 4th medal .. super stuff. #Tokyo2020  #Hockey

However, the harm was only done as the eagle-eyes fans on social media had already noticed the goof-up. Soon, screenshots of that deleted tweet started making rounds on Twitter as people trolled him left, right and center. There were many who came up with hilarious memes and jokes while trolling the actor.

Why deleted this 😂😂😂
This is the result of copy paste without reading the content !!! pic.twitter.com/TUqM0va3eD

These tweets are enough to prove that he is on high weed.
Male version of @aliaa08 @FarOutAkhtar pic.twitter.com/toECPsTdsN

@FarOutAkhtar was following the hockey match just like the way he knew about what CAA is while attending a protest. 😂 #Hockey #hockeyindia #farhanakhtar #TokyoOlympics pic.twitter.com/RSAQJsQeP0

Farhan Akhtar is a time traveller. Therefore, sometimes he recommends to something which is already happened in the past and sometimes he predicts the future. pic.twitter.com/UKBY1KgiE1

Net-Worth Of The 'Sensational' Mia Khalifa