Sidharth Malhotra and Shilpa Shetty with Rohit Shetty on the sets of Indian Police Force.

The video starts with Sidharth punching and throwing off goons and baddies. He throws  them in a water tanker from the first floor of an abandoned  building. The scene is  followed by Shilpa’s entry.

Breaking  a glass wall, she fights a lot of men with a wooden stick. At the end, Nikitin tackled more men with bare handedly and Rohit Shetty captures all these stuff in his camera. He handles the camera himself which  connected to a harness throughout the shoot. 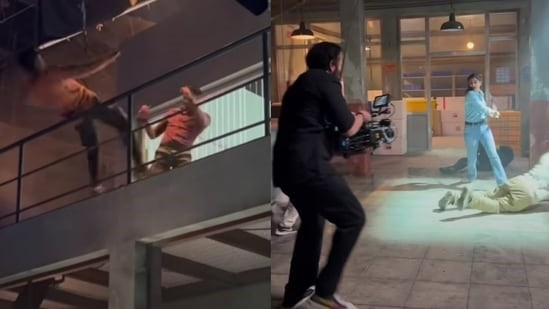 “Never a dull moment on sets of #indianpoliceforceRaw and real! Don’t miss @itsrohitshetty on the harness.”

Reacting to the intense shoot, Shamita Shetty, Sophie Choudry were spotted all excited about the project in the comment section.

“It’s amazing this is really really crazy my goodness I mean just wow.” “I guess too much hardwork involved in shooting,” added another fan. Someone else also shared, “I can’t wait to see you in Indian Police Force Shilpa, you are gonna be awesome!”

Indian Police Force is all set to release on Prime Video. Previously, the team wrapped up a schedule in Goa. Talking about the project. Rohit  said,

“Indian Police Force is a very special one for me and I’ve been working on it for years. I’m delighted to be collaborating with Amazon Prime Video to breathe life into this story which will transcend geographies and linguistic barriers, providing me an opportunity to showcase the same to audiences worldwide. I am super excited to be working with the amazingly talented Sidharth Malhotra in this series.”