Social media has become a place for most of us to check out the pictures of some of our most favourite celebrities. They can be film stars or sports icons. While some of them are very active on social media, there are several others who keep uploading the pictures and videos of some of the special events of their lives. However, there are certain people who visit social media sites just to troll the celebrities mindlessly. It seems like they have only one aim in life, which is to objectify the stars for their clothes and behaviours. At times, they also use abusive language to vent their frustrations.

However, these days, the celebrities, especially women, don’t ignore these trolls any more and provide fitting replies to shut them up. In the following lines, we will have a look at a few instances.

The Indian women’s cricket team captain, Mitahli Raj, has had to face such idiotic trolls. She once posted a picture of herself with fellow Indian cricketer while attending a function. Someone trolled her by commenting on the picture, “sorry Smt Captain, hahaha odd looking. the fasina wet.”

I m where I m because I sweated it out on d field! I see no reason 2 b ashamed f it, when I'm on d ground inaugerating a cricket academy. https://t.co/lC5BOMf7o2

To this, Mithali replied, “I m where I m because I sweated it out on d field! I see no reason 2 b ashamed f it when I’m on d ground inaugurating a cricket academy.”

She was trolled hard after her loss to Maria Ulitina of Ukraine during the Rio Olympics. A Tweeter user posted, referring to another badminton star PV Sindhu of India. The post read-

To this, Saina replied-

She met PM Narendra Modi in Berlin and posted a picture with him.

Thank you for taking the time to meet me this morning @narendramodi Sir. Such a lovely coincidence to be in #berlin at the same time. 🙏🏼🇮🇳 pic.twitter.com/vLzUSH5WR1

To this, several users wrote- However, Priyanka did not give them any replies. Sometimes silence works best to ward off idiots.

The beautiful host who became a heartthrob of the nation later got married to Indian cricketer Stuart Binny. He was out of form while playing for Rajasthan Royals in the IPL. Some people started blaming Mayanti for that and posted hate messages. To this, she replied- 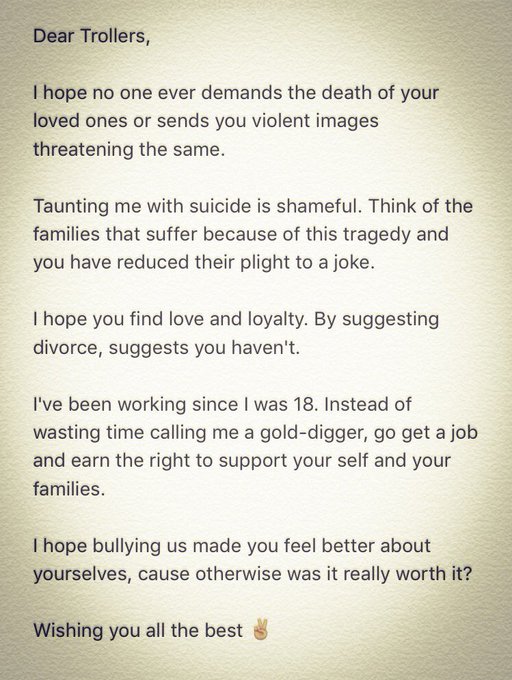 She has had to face such trolls quite a few times on social media. Once, someone wrote this on a bikini-clad photo of her-

To this, Taapsee replied-

5 Bollywood Couples Who Were In Toxic Relationships