9 Bollywood Celebrities Who Love To Sleep Without Clothes 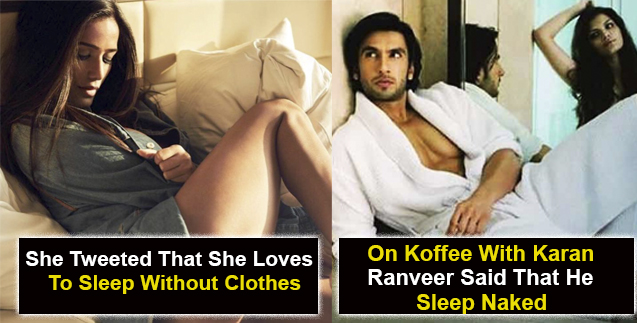 The Bollywood stars are always in the news, sometimes for the good things while for the bad things as well. The common people, especially the fans of these celebrities are always curious about how they live their lives. EVery statement coming from these stars are more than commandments for them. Some of these stars, both male and female, have revealed that they like to sleep naked and this has been a sensation among their fans.

There are several benefits of sleeping. Not only does cooling your body help you fall asleep faster, it also improves your overall sleep quality. If it’s too cold or too hot, you risk impacting your rapid eye movement sleep, which is the dream stage of sleep that helps refresh your brain and body. Sleeping naked is one way to stay cool beneath the covers.

Another reason sleeping naked might be a good change is that it could help reduce your overall stress and anxiety. It’s no secret that poor sleep has a major impact on your stress levels and no film star will ever want to have a sleepless night that will damage his/her overall health conditions.

In the following lines, we will have a look at a few such celebrities who have revealed at some point in their lives that they sleep completely naked or with bare minimum clothes.

Like his Dishoom co-star, John too loves to sleep naked. In an interview, he said, ” I love to sleep naked because I feel comfortable and good with this, after all its my house and why I wear clothes under the sheet?”

In Koffee With Karan where he came with wife Mira, Shahid said that he has now started sleeping without clothes!

She said in an interview that she hates going to bed with clothes on. She told that she, in fact, loves to sleep in her “born dress”, by which, we assume, she means nothing.

She had told the world about her ove for sleeping naked by posting a picture of her sleeping, nude!

The television host who stripped down for Allure Magazine said that she likes to sleep in the nude when in her own space.

The actress revealed in Koffee With Karan that she loves going to bed with the bare minimum.

Varun confessed that since his school days he has been allergic to clothes,and he just wear shorts when he is at home.