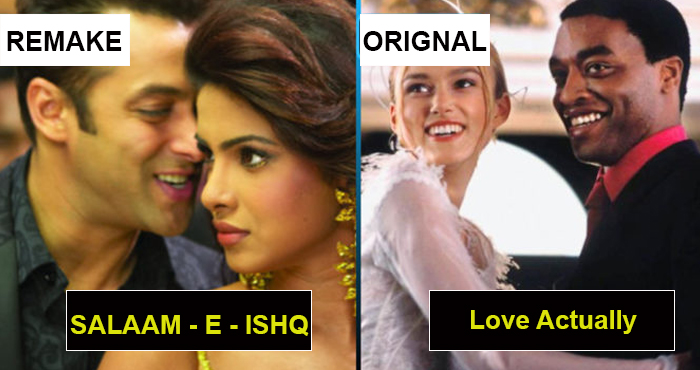 The industry of creation and media depends highly and mostly on inspirations that help one better itself. The Bollywood area of glitz and glam that produces the highest number of movies per year is constantly under pressure to come up with something new. Thus, it is not news that in our times we have seen more remakes than we can keep down.

From songs that made remakes of olden gems to storybooks and movies. The Bollywood creation has at times hit a block that had them derive creative push and inspiration from foreign lands. However, it has been only in recent years that we have got through the legality of purchasing rights from Hollywood creations.

But, before that, we did derive ideas and put them on screen after making subtle changes. Today, we bring you a list of 11 such Bollywood movies( hits or otherwise) that were copied from Hollywood creations. 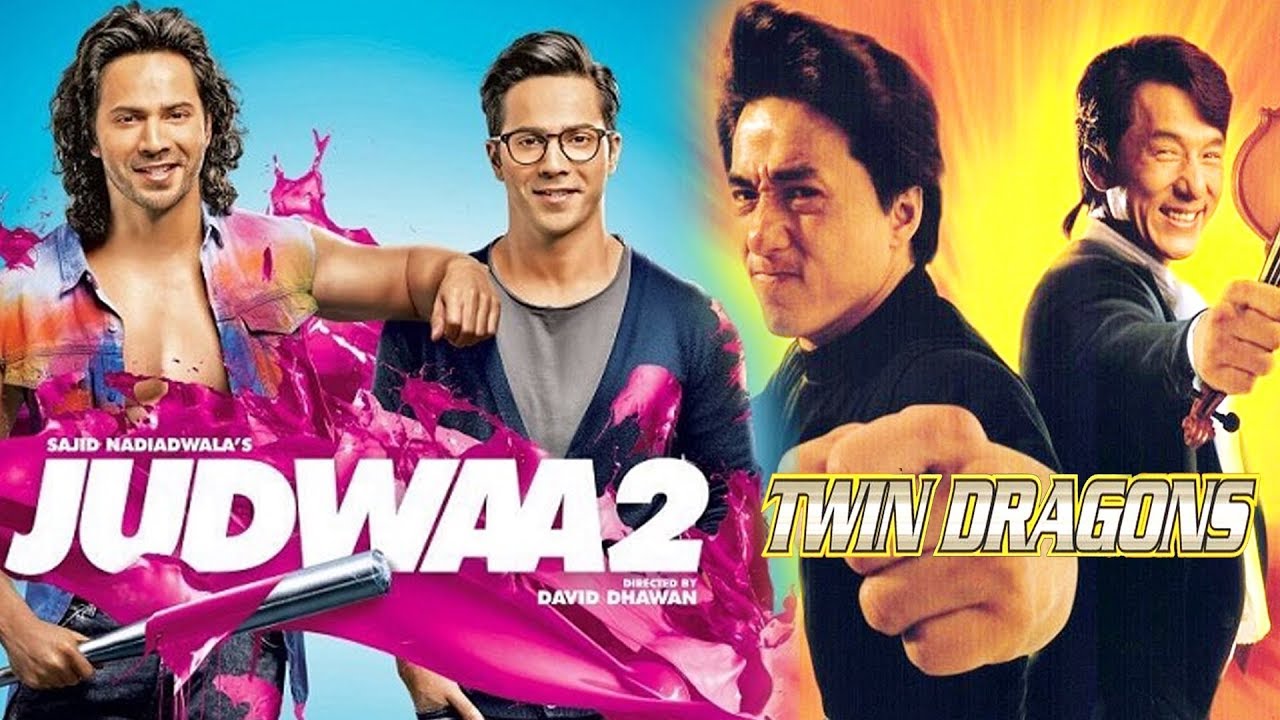 The 1997 Salman Khan starrer that shattered box office records with the fun story of two identical brothers (twins) who got detached at the time of birth only to reconcile later on is a copy of the major Hollywood hit Twin Dragons that had Jackie Chan in it. The movie became such a hit that the remake of the Hollywood story was made again and titled Judwaa 2. This time it had Varun Dhawan in the lead and followed the same hilarious storyline with a newer approach. 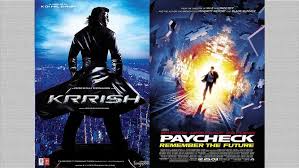 The series that established Hrithik Roshan as Bollywood’s first superhero did amazingly well at the box office. The three-part series till now: Koi Mil Gayaa, Krrish and Krrish 2 have done exceptionally well throughout. Even though the entire scenic expression and story was not a rip-off, but it did draw its major push from the Hollywood movie Paycheck. The series, however, was not a total remake as the story did have a lot of different takes and turns and did have various new points and plot twists added to it. 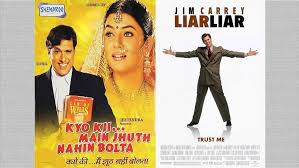 If you are an ardent follower of movies and a self-proclaimed cinephile, then it would not take you long to figure this out. If we are correct then this was already on your mind. If you have watched the two movies once in your life each then it will be crystal clear to you. The comedy of errors, that established Jim Carrey in his brilliance follows the story of a well-established lawyer who loses his ability to lie and make false statements. This starts up a series of hilarious events that you would make it impossible for you to not laugh. Bollywood soon after took up the idea and came up with the exact plot starring Govinda and Sushmita Sen that left the audience in splits. To be honest, the story is exactly similar with very little natural resource. 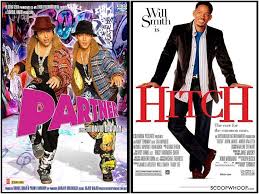 The Salman and Govinda starrer was a movie that did exceptionally well due to the idea and storyline that gave the viewers a much-needed breath of freshness. The movie surrounded a Love Guru (Salman) who helps Govinda (an amateur at love) get his love. The movie came out two years later after the original movie, Hitch hit Hollywood. Hitch, had the ever charismatic Will Smith playing the role of the advisor and did amazing with the crowd.

A fool and Final- Snatch

There have been times in Bollywood cinema, where even after copying off a very well-reviewed movie of Hollywood, it did not do well. Fool and Final, was such an example. Even though it derived inspiration and shamelessly followed the plot, characterisation and storyline as the Hollywood hit Snatch, it was a flop. The 2007 movie though had an amazing cast and gave out brilliant performance it did not resonate well with the viewers, sadly. 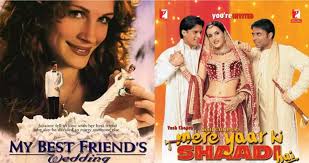 This is a movie that did the same level of brilliance in both the languages and medium. The movie Meri Yaar Ki Shaadi Hai was a complete and utter copy of the sensational Julia Roberts’ My Best Friend’s Wedding. The movie even kept the same title and does not leave much to the imagination. The only change that the movie had was the exchange of the genders in the Bollywood remake. The movie follows the story of Julia Roberts, who realises that she is in a love with her best friend on the day of his wedding. The idea follows with the unfolding of a relaxed light-hearted romantic comedy with a few extreme heartfelt scenes. 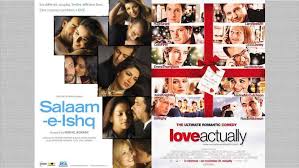 Bollywood came up with the idea of putting different stories in a single movie in the year 2007 and it started with the brilliance that Salaam-E-Ishq was. The movie bought forward the stories of different couple side by side and maintained a seamless representation showing different sides to the beautiful emotion that is love. Life in a Metro became also such movie that followed the same idea in a more connected way. However, not known to many, Bollywood came up with the idea from the beautiful portrayal that was brought about by the heartfelt stories that were bough forward in the movie Love Actually. 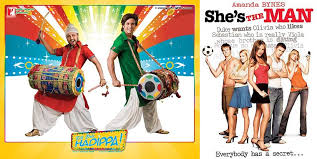 In 2009, Bollywood came up with a unique concept that did bring forward a lot of contest. The movie talked about gender stereotyping and was critically acclaimed. Dil Bole Hadippa had a bubbly Rani Mukherjee dressed as a man, just to follow her passion of playing cricket. This idea, however, was not independently portrayed. It appeared first in Hollywood with the cinema She’s The Man which had the same storyline. The only difference was the sport. Bollywood used cricket in place of football. Apart from that single point, the same story prevailed in the Hollywood remake.

Dostana-Now I Pronounce You Chuck And Larry 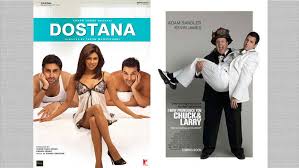 Dostana was a movie that shocked Bollywood with the response it received. The film revolved around two friends of the same gender who had to act to be in love to get a place to live in. Even though it was the first movie to talk about a grave topic in and around a fun environment, it was not an original idea. The inspiration of the comedy was taken from the movie Now I pronounce you Chuck and Larry. However, the movie did amazing due to the freshness that it bought about. 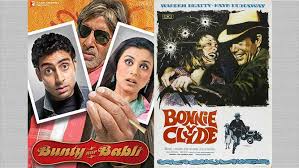 Hollywood cut a ticket to the lottery with its massive hit Bonnie and Clyde that took the entire world by surprise, due to its out of the box approach. Bollywood soon derived inspiration and pushed itself to make a copy and came out with Bunty aur Babli. Needless to say, it was a hit without words and took up Bollywood by storm. The simple story of two con artists opened the type of content available throughout and thus remains a massive hit.

Tees Maar Khan- After The Fox 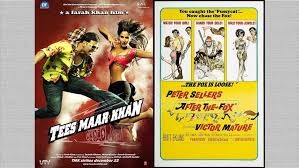 Farah Khan confirmed that she always was intrigued and inspired by Peter Sellers’ work, and that is why she derived the idea and motivation of Tees Maar Khan from the same. The movie is a direct copy of the Hollywood story of After the Fox that has a master of disguise fool an entire village to succeed at an impossible heist. The Bollywood remake had an extremely funny Akshay Kumar in the lead and connected with the audience.